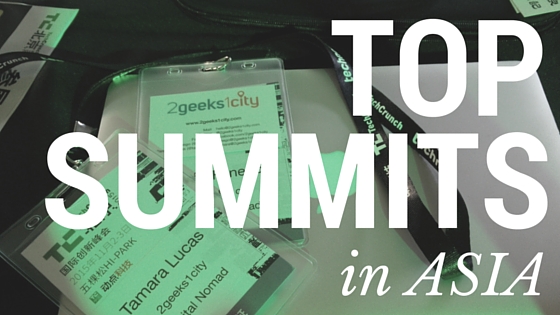 Attending events always help the networking and are the perfect excuse to connect with people in your industry. Regarding the entrepreneurial ecosystem, the different types of events held are important because:

And this is something universal, no matter where you are, Spain, China or Thailand, if you want to connect with the innovative, digital and/or entrepreneurial community, attending events will help you. This is something we have experienced in our own flesh. In China, attending the TechCrunch Beijing 2015 helped us to both connect with some of those interviewed during the trip and have a 360º vision about the technological, digital and startup scene in the country.

Below this lines you can find the Top Tech and Startup Summits in Asia. Those that people have mentioned us along our journey, those who everyone speak of wherever they are based, those who everyone recommended us before we left Spain… In short, those who must have in your roadmap in Asia.

The top conference in Asia is undoubtedly the Echelon Summit organized by e27, one of the top media news in the region. It is the meeting point for those who want to create or seek opportunities in Asia related to technology, business and / or investment.

They are releasing the agenda for this 2016 and there is no doubt that it will be at the same top level from previous years. For their scenarios have passed names like Edit Yeung or William Bao Bean. In this 2016, they have announced top speakers like Hubspot, Jobbatical or Goldman Sachs.

Everyone in this industry has heard about the MIT Technology Review. Well, maybe not everyone knows that the MIT organized several conferences about emerging technologies around the world. The Asia version is held in Singapore and Hong Kong. The last one took place in January 2016 and topics like Artificial Intelligence, Virtual Reality, eHealth and FinTech were treated on it, among others.

The event aims to show those emerging technologies that have the potential to change our lives. Seeing the panel of speakers from the last edition, this event, either in Asia or in another region, is a good hub for ideas, and to see where the future goes (and, of course, to network).

TechCrunch is one of the most-known tech news in the industry and their events around the world do not disappoint. We had the opportunity to attend to the TechCrunch Beijing 2015 held in October. For the Chinese market TechCrunch has as partnership with TechNode, which is the reference in technology in China, but also cover Asia. As we have said before, if you want to enter China it is better to have a local partner.

To keep update with upcoming dates is best to follow the international events page of TechCrunch, since they are not always in Beijing. They have made some in Shanghai too.

We especially enjoyed the event because it allowed us to fully immerse ourselves in the tech trending topics of China, learn about the impact of the middle class in the country’s development, meet the big players in the market and have a complete vision about the digital transformation in the country.

Geeks on a Beach

Geeks on a Beach is the event that caught our attention from the first day we heard about it. You can imagine that with that name would not be less… 🙂

It is an event held in Philippines and, yes, on a beach. In it you will find talks about three main topic: startups, technology and design. You know, the things that geeks like us like.

And do not be fooled by the fact that it takes place on a beach, although the place is informal, the event features topics concerning all Asia and is already in its fourth edition. In the last edition, for example, they had Dave McClure, Founding Partner of 500 Startups, Mohan Belani, Co-founder and CEO of e27, and Oko Davaasuren, Regional Director in Techstars, among others.

It reminds me the SEontheBeach made in Spain. I’ve never been to any of them, but hopefully that will change soon…

Another events that can not miss on our list are those of Tech in Asia. In every event they held on Asia they promised a 2 days conference where entrepreneurs, investors, corporations and media can meet. This April they held their conference in Singapore and next June in Bangalore.

The level of speakers is amazing. From the CEO VP Product Line Management up of Google, through representatives of companies such as App Annie, Rakuten Ventures and 500 Startups.

Besides the big summits with keynotes, workshops and much networking, another way to get involved with entrepreneurial, digital and technological community in each city it is through the events held. I would say that (almost) every day of the week you can find an event to attend related to the sector in most major cities and it is a good way to become familiar with the community and make yourself known.

Tiago from aptoide told us about RISE in Hong Kong, another event you can’t missed. RISE is produced by the team behind Web Summit.