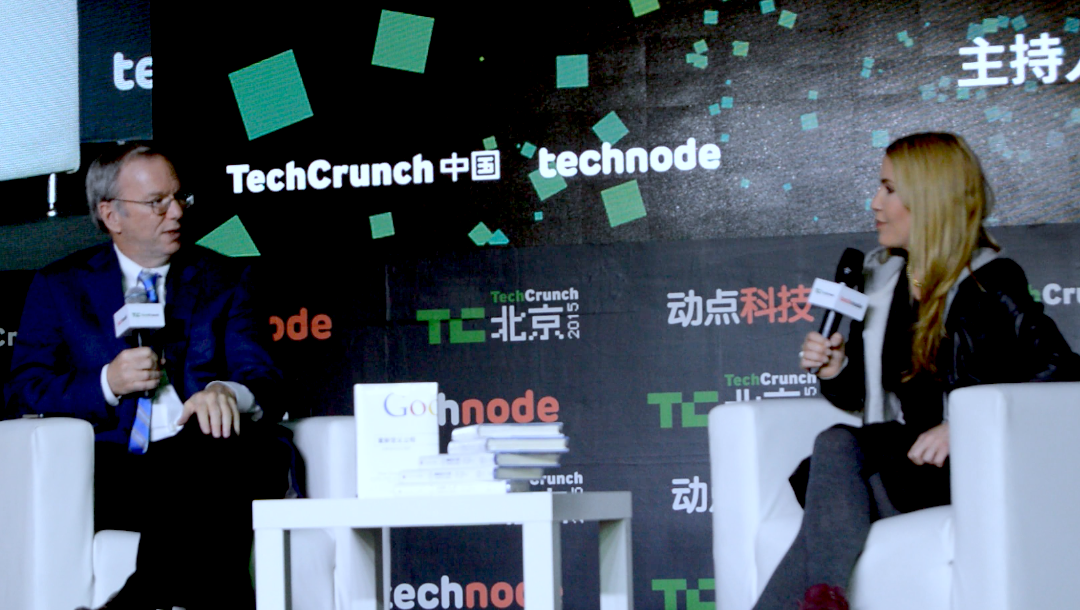 Yesterday we spent the day in the TechCrunch event in Beijing: Discover the Dragon’s Web. Chinese Internet is not very well known in western countries. Most of us have a biased or partial perception and (I think) we are not really conscious of the sofistication of this market. A mainly mobile market that have lived a parallel development to the western countries, with the Chinese companies as the main players.

It is being a spectacular event, full of great people such as Eric Schmidt (Google/Alphabet), Ned Desmond (TechCrunch COO) or Allen Wu (ARM President).

Talking about Eric, almost anybody knows that Google left China in 2010, but Schmidt left it clear that “Google never completely left China”, and it looks that they are going to increase its presence in the country.

As he clarified there are yet around 500 hundred employees in the country, with offices in mainland China, Taiwan and Hong Kong. I would add that Android is the most used OS by Chinese mobile manufacturers (although without Google Play).

Some people say that Google wants to increase its presence in the country and that one of the first initiatives would be to launch a Google Play for China.

China, as an “emerging superpower” is gaining attention, from Google and many others. The image we got of “copy everything” does not reflect the truth. As Schmidt told us WeChat is a clear example: something that could not have happened in any other market, because Chinese needs are diferent to other countries. Understanding WeChat is not an easy matter for a westerner: first of all you have to forget the idea of a “Whatsapp clone”. WeChat integrates a great quantity of third-party services, you can pay your bills, book a taxi or use it to meet new people by shaking your phone. While we write our post about it you can read this great (really great) post by Andreesen Horowitz.

And going back to the subject, Google (or Alphabet) invested in the Chinese Startup Mobvoi an unknown quantity, as part of a 75 million $ investment roundthis October (2015).

What is Mobvoi? Mobvoi mission is to define the next generation of interactive technology. Voice search (in Chinese) and wearables. Software and Hardware. But…

Why is Google investing its money in it? I would say there are 3 reasons that fit really well in Google’s strategy:

Mobvoi is a Chinese startup (cofounded by an ex Googler) which makes soft and hardware, focused in wearables and semantic & AI. That sounds like a fit.

Google wants to make us smarter

Organizing world’s information is not enough. What Google wants now is to make us smarter. There is some criticism, like using pcs and mobile phones for everything is making us dumber. But his view was that technology saves us time. Learning by heart can be a good example of a waste of your time you can avoid.

About Alphabet and Google reorganization

They are pursuing to be more agile. Being part of a big company creates a lot of dependencies, so they prefer a structure with CEOs that will be allowed to do whatever they think is the best, without waiting for eternal approvals.