The Durianscape, understanding the startup ecosystem in Malaysia 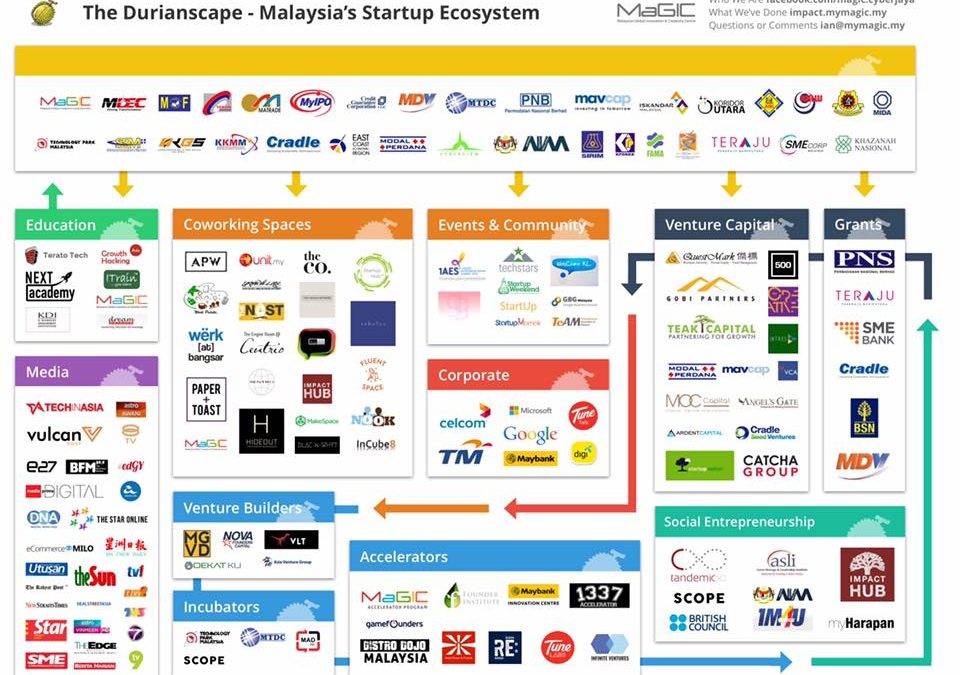 We arrived in Malaysia after almost a month in Myanmar. We travelled a lot around Myanmar, with a bad internet access, making more tourist things than usual and after three intense days interviewing startups, we landed in Kuala Lumpur. At the beginning, we wondered How Malaysia was going to be and so Malaysian startup ecosystem. All the recommendations we got from the country were about food and beaches (all were right) but now it was the time to discover the country.

In this short documentary, we counted on the experience of four experienced entrepreneurs in the country: Karl Loo, from ServisHero; Lee Ching-Wei, from iMoney; Andrew Wong, from MAD Incubator, and Ehon Chan, from MaGIC. We asked them not only about the startup ecosystem in Malaysia but also about their startups and incubation/acceleration programs. So in addition to the short documentary, we have dedicated specific videos about them. You can watch the videos along this post or on our YouTube channel.

Durianscape: the startup ecosystem in Malaysia

Although there is no unanimity among our interviewees in defining the startup ecosystem in Malaysia as mature or young, they agree on the fact that the number of startups has grown considerably.

Two factors are responsible for the acceleration of this market: the public sector initiatives and investment/technological IPOs occurred in recent years.

Before going into the detail of these factors, it is better to take a  visual look at the current ecosystem in Malaysia, shared by MaGIC. Although it is not updated, only the 2015 version is available so far, it allows us to have an idea of the main players in this ecosystem: 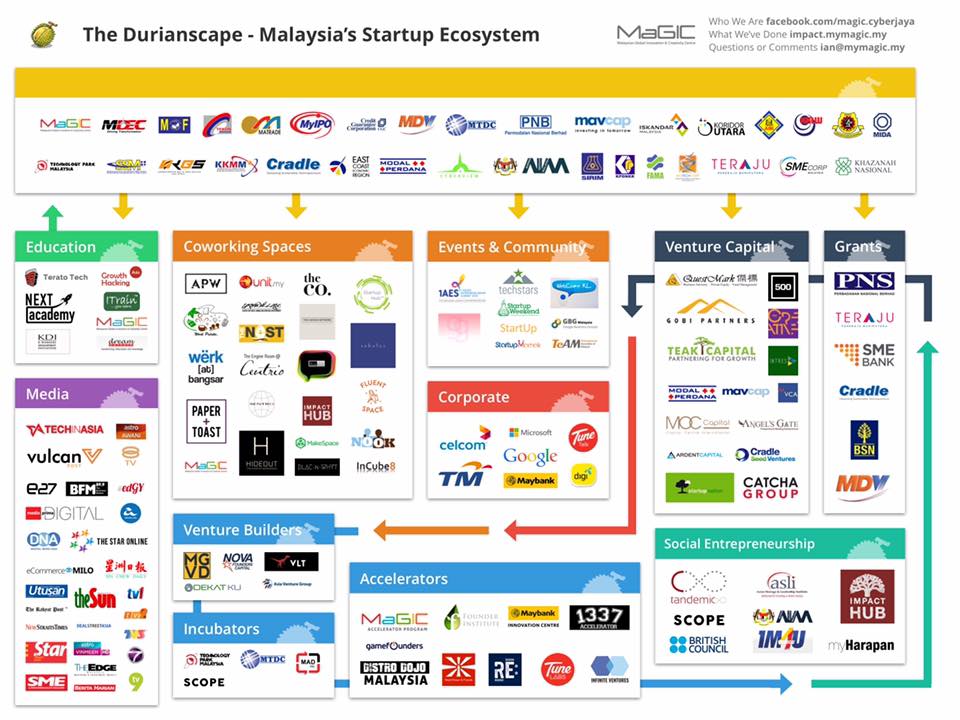 Although MaGIC or the “Malaysian Global Innovative & Creativity centre” is the ultimate exponent of the public sector support to Malaysia’s startup ecosystem, since the early 2000s it is possible to find examples of government initiatives that supported the development of the technology industry.

In 2001 the Ministry of Finance created the MAVCAP (or Malaysia Venture Capital Management Berhad). This institution was born with not other goal that invest in the technological sector. Today’s largest Venture Capital firm in Malaysia has Gobi Partners, one of the top VCs firm in China, and 500 Durians, which is the Malaysian version of 500 Startups, among its partners.

It was in 2014 when MaGIC saw the light. In the words of the CEO of MaGIC:

“MaGIC’s initial focus on education, exposure and acceleration charted an agnostic platform and foundation for all parties to genuinely come together and create a critical mass much needed to take this ecosystem to the next level” Cheryl Yeoh, CEO MaGIC

One of the ideas behind MaGIC is to provide training and top class speakers to Malaysian entrepreneurs to import leadership mentality among the startup community of Malaysia. In fact, one of the things we have observed in other economies in the region is the search for local heroes who tell their story and inspire younger generations.

Together with all these educational resources, MaGIC also carries out several incubation and acceleration programs for startups and has even its own MAKER workshop in the building.

In addition to education programs and startups acceleration, another of the areas in which MaGIC is focused is in social entrepreneurship. We had the opportunity to interview Ehon Chan, Executive Director of this area.

I highly recommend reading this publication by the CEO of MaGIC in which he tells the vision, roadmap and next steps of this initiative.

Malaysia has some of the successful stories in the region. Malaysia is the country with more IPOs in the area and its startups have a clear vocation, at least, regional.

The private sector is another key factor behind the growth of this sector in Malaysia. Although in some cases, private and public sector reach agreements of collaboration. This is the case of 500 Startups with MaGIC with the Distro Dojo program to grow startups.

A downside is that while in early-stages, incubation and acceleration, investment and support are relatively accessible, the same facility is not found in more advanced stagestages. And although the gap between private support and public support is narrowing, public support is still greater. 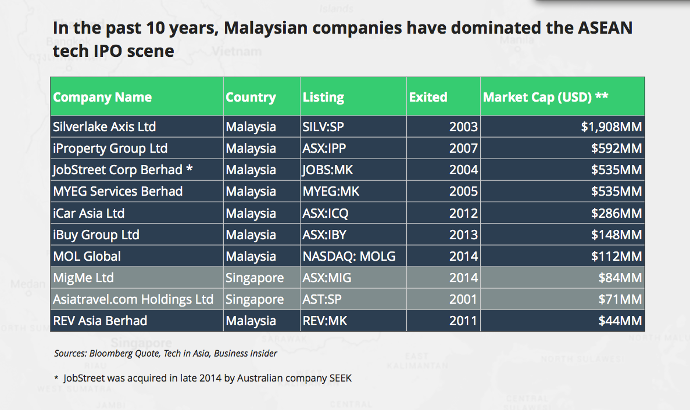 On opposite, you can find the global perspective. Three of the four interviewees have offices in other countries around the area. Both ServisHero and MAD Incubator are already settled in countries like Thailand, Indonesia or the Philippines, while iMoney has already begun its expansion in the area

Other examples that are always mentioned are: iFlix (the Asian Netflix) or GRAB (formerly Grab Taxi and the first unicorn in the country). More than startups, we could say companies because they have proven their business model. Both startups have grown rapidly in the region, investing in local teams.

Takeaways of these 2 Geeks in Malaysia

Malaysia may not be as mature as the Chinese or Singaporean markets, but we have found a country that is investing in the technological growth of its business, with public, private and entrepreneurial support, most of them with international experience.

It is true that many of its success stories are based on exporting ideas that have worked in other countries, just adapting them to their characteristics (did not China do that?). But they are being agile in growth and expansion, which from my point of view, is giving them a competitive advantage over other less mature economies such as Thailand.